Grenfell and Hunt, courtesy of the Egypt Exploration Society

Normally, when I get to write about something that has never been seen before, it’s off the back of my own research, so this post is a really exciting departure for me. Today, I get to show you something I’ve been sent, and it covers the three awesome themes of erotica, Egypt and exploration. For me, Ancient Egypt has always seemed to have had a tangible thread in the background of our culture, from the first on screen appearance of The Mummy in 1932, to its modern day incarnations in The Extraordinary Adventures of Adele Blanc-Sec, and the Stargate franchise. For those in the 19th century, interest grew with the 1827 publication of ‘The Mummy! Or A Tale of The 22nd Century’ by Jane C. Webb Loudon; and by 1877, when Amelia Edwards published ‘A Thousand Miles Up The Nile’ – an account of her winter voyage through Egypt a few years earlier – fascination with the ancient world grew to a fever pitch.

Amelia Edwards was an extraordinary woman. Having witnessed the destruction of many of the monuments that scattered the Nile Valley she returned to England determined to stop the desecration. Finding little early support in the British Museum, she helped to found the Egypt Exploration Fund (now known as the Egypt Exploration Society), to record, preserve, and recover the disappearing culture before it was too late. She raised the necessary funds needed to send archaeologists, such as Flinders Petrie, to carry out the EES’s excavations in Egypt, something it still continues to do today.  The Director of the EES, Dr Chris Naunton, covered much of this in his documentary ‘Flinders Petrie: The Man Who Discovered Egypt’ which is how I heard about their work, and the amazing 19th century lives that went into the Society’s foundation.

Currently, one of the EES’s main projects involves the study of The Oxyrhynchus Papyri, excavated by Bernard Pyne Grenfell and Arthur Surridge Hunt in the 1890s, and now held in the Sackler Library in Oxford. The papyri included everything from receipts and shopping lists, to plays and poems of the Ancient Egyptian, Greek and Roman worlds – over half a million fragments were recovered, and are still being catalogued and transcribed today. Any budding Egyptologists out there can help with this project by heading over to Ancient Lives, where you (yes, YOU) can view and read the ancient texts that have so far been digitised.

But that’s not what I’m writing about today. Not only are the EES cataloguing the papyrus, but they are also archiving the objects owned by the explorers themselves, and that’s where my interest comes in. Recently found by the curator, Dr Daniela Colomo, and tucked into the pages of Grenfell’s notebook from his 1898-99 explorations of Fayum, was a small photograph of a naked woman. 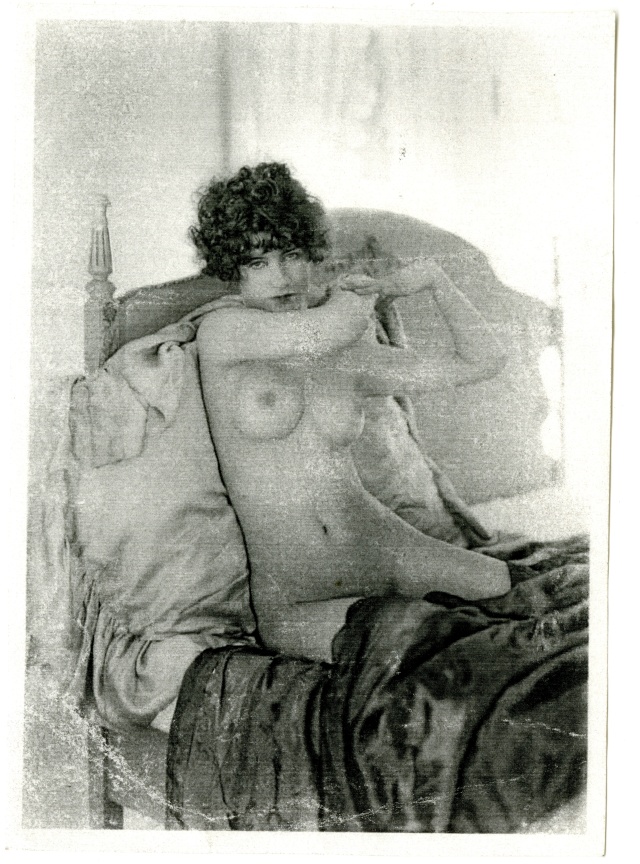 Now, this is pretty standard late Victorian/early Edwardian fare. It’s not overly graphic, and uses a soft intimate positioning, which titillates without being overtly shocking. But what’s really fascinating to me is the question of how this photograph became connected to the diary of an eminent Victorian archaeologist. There’s not a lot immediately obvious at first glance, although she does look terribly familiar – like a young Clara Bow – which makes me think we can date it to 1899-1920s. Given the Fayum’s proximity to Cairo, it may be that the photograph made its way to Egypt from the brothels of Paris, along the trade routes that Grenfell would have been familiar with. But with the hairstyle pictured I’m more inclined to place it towards the later end of the date spectrum, which might suggest Grenfell acquiring it once he had become Professor of Papyrology at Oxford in 1908. Is it possibly something he confiscated from one of his students? Or, is it something he had for his own enjoyment? No-one has handled the diary since Grenfell bequeathed it to collection after his death, so it is unlikely that it could have been contaminated by another agent. However it came to be part of the Oxyrhynchus collection, the inclusion and record of this seemingly unimportant photograph is a tantalising glimpse into the secret life of a seemingly respectable Oxford don.

So what can this tell us about erotica, Egypt and the Edwardians? (Or the Victorians – that’s the only annoying thing about turn of the century stuff, people end up being both!). We know that other archaeologists of the EES were somewhat perturbed by the ancient Egyptians approach to sex and sexuality – Flinders Petrie’s discovery of a number of artefacts of the god Min, who was often depicted in a masturbatory stance, with either an erection, or his hand around his penis, and often left out that single fact from both his written records and photographs – as we can see here, with the help of a delicately placed sticker… 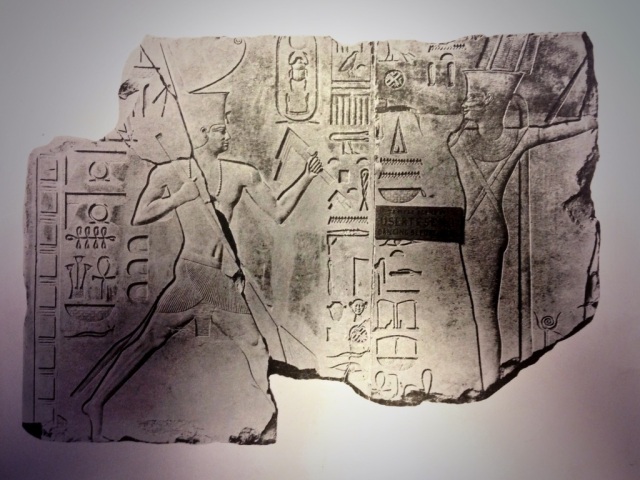 So did the Victorians who excavated ancient Egypt deserve the title of ‘Erotic Explorers’? Did the removal from England, and her supposedly strict sexual social rules, somehow allow them to be more freely expressive? If we look at Petrie and Grenfell, then I think the answer is, potentially, no. But one of the flaws of sex history – from a historian’s perspective – is countering the desire others have to create a sexually universal historical attitude, when the attitudes that were expressed were just as diverse, and just as polarized, as we see today. So am I surprised that the respectable oxford professor secreted a naughty photograph in an old diary? Or that another explorer spared his own blushes by ignoring the evidence in front of him? Maybe a little, at first. But then, if they didn’t surprise me, they wouldn’t really be Victorians now, would they?

*For more on Amelia Edwards, and other incredible women of the 19thC, have a read of #12wmn12hrs. And catch Dr Chris Naunton’s latest documentary ‘Tutankhamun: The Mystery of the Burnt Mummy’ on Channel 4, Sunday 10th November, 8 pm, and online at 4oD.